Kount Launches Inaugural Report on the State of Chargebacks - Kount

Kount Launches Inaugural Report on the State of Chargebacks

Boise Idaho, January 31, 2018 — Kount, a leading innovator of solutions for fraud and risk management, and Chargebacks911 today released the 2018 State of Chargebacks Survey, the inaugural report assessing the current state of fraud and chargeback management in card-not-present (CNP) transactions.

The first of its kind to focus on chargebacks, the survey shines a light on the state of fraud within the Card Not Present (CNP) channel, including key facts and figures such as chargebacks, disputes and win rates. More than one thousand respondents, representing organizations of all sizes and industries and across varied geographical areas, participated in the survey, sharing their experiences, insights, and performance related to managing risk and chargebacks for online and mobile commerce.

“Chargebacks within the CNP channel are a growing concern among online merchants,” said Brad Wiskirchen, CEO of Kount. “This inaugural report was important for the industry to understand the state of the market today, the current challenges that merchants face, and the fraud technology and tactics that they are deploying to combat chargebacks.”

Specific results and findings of the survey include:

The report found that while most merchants are actively disputing chargebacks (82%), 10 percent are in excessive chargeback programs and almost one in four (24%) state they had no idea what their actual win rate was when it came to those disputes.

Organizations in the Event Ticketing, Apparel/Accessories/Jewelry, Home/Kitchen/Pets/Toys and Travel/Entertainment/Leisure industries have the lowest chargeback rates, with at least half of these organizations reporting chargeback rates of 0.5 percent or less.

But some merchants do give up the good fight — 11 percent of respondents said they do not dispute or re-present any of the chargebacks they receive. Reasons for not doing so included:

The survey found significant variation in chargeback dispute win rates. When asked about chargeback revenue recovery win rates, 24 percent of the respondents said they did not know what their actual win rate was. The next two most likely responses were at opposite ends of the spectrum, with 19 percent citing a win rate of less than 15 percent, and 18 percent citing a win rate of more than 60 percent.

Chargebacks continue to be a big issue for merchants, especially in Q1 where merchants are likely to see an influx of chargebacks following the busy holiday retail season, due to the typical 60-90-day lag time in chargeback reporting.

Nearly half of respondents overall (48%) claimed CNP fraud was their biggest source of chargebacks, followed by friendly fraud (28%), account takeover fraud (7%), and merchant error (4%). Meanwhile, 12 percent of organizations reported that they don’t know the cause of the majority of their chargebacks. 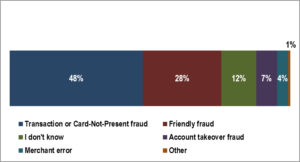 The two most cited challenges with chargebacks were disputing them (59%) and being able to identify friendly fraud (58%). Gripes with disputing chargebacks, a process known as re-presentment, can include low win rates and the operational requirements or burden of conducting chargeback re-presentment. Friendly fraud is another major source of frustration as merchants struggle with how to handle dishonest customers and a payment chargeback system that can often favor cardholders. Other challenges cited by respondents include:

Most of the organizations surveyed (88%) deploy multiple tools or services for fraud and chargeback prevention, with more than three-quarters using three or more fraud fighting features or technologies, and nearly two-thirds using four or more. The most used fraud fighting techniques include:

The full report is available for download here. Kount will also be hosting a webinar on the findings and the state of chargebacks on January 31st at 10:00 a.m. PST/1:00 p.m. EST. To register, visit: http://info.kount.com/webinar/state-of-chargebacks-2018.

Kount employs dozens of proprietary and patented fraud screening technologies—integrated before a transaction occurs—to generate hundreds of data elements per transaction across billions of transactions from over 180 countries to detect fraud and minimize chargebacks.