When Kount, a Boise tech company that helps businesses fight e-commerce fraud, outgrew its headquarters on Lusk Street, it began looking Downtown for a new home for its 175 employees.

It found one in the four-story John Alden Building at 10th and Main streets. Sawtooth Development Group of Ketchum, which bought the office building in 2013, is spending $3.8 million to renovate it, according to city building documents.

Kount couldn’t have found a better location, said Kate Lenz, vice president of human resources. Several other tech companies, including Clearwater Analytics and Cradlepoint, are nearby.

“We felt the proximity to other tech companies would help with recruiting,” Lenz said. “We also felt it would be a great place for our employees to be close to Downtown activities such as First Thursday and Alive After 5, as well as all the fantastic restaurants and breweries.”

The Kount project is one of dozens underway in the sixth year of a construction boom that is dramatically changing Downtown. New apartments, condominiums and townhouses are still going up, including a few aimed at lower-income or homeless people. A new hotel opened last month, adding to three that opened in 2017, and yet another is planned. A venerable Downtown building, the Capital Terrace, is getting a makeover.

The list of projects underway or planned is especially heavy on housing, with at least 315 apartments in four projects and 144 condominiums and townhouses in six. But there are also two hotels, two hospital projects, two new office buildings, a new Downtown library, a bigger Idaho history museum, and a stadium accompanied by residential, office and retail development.

When they’re done, Boiseans will have more places Downtown to live, work, eat, shop, lodge visitors, enrich their minds, take care of their bodies and enjoy themselves.

Here’s a look at 23 current projects — one newly opened, 11 under construction and 11 planned or under discussion.

Kount, which will lease from Sawtooth in what will be renamed the Kount Building, will maintain a reception area on the first floor and house employees on floors three and four, plus an added fifth floor. The second floor will be left vacant at first. The company will use it to add employees later, Lenz said. 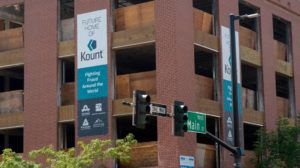 Kount will also use the basement for locker rooms, showers, bicycle parking and storage.

The building’s ground floor includes the newly opened Keckar Coffee shop and Hue beauty salon. A small grocery store is also planned, along with a restaurant.

Kount expects to move in during the first quarter of next year.